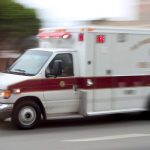 How Much Does an ER Visit Cost?CHR Blog