New poll (Wave 18) conducted July 24-27, finds that more people report wearing a mask. The highest level so far – 88% – report wearing a mask all or sometimes when leaving their home; 63% said “at all times”. Maintaining a 6-foot distance from other people “at all times” is noticeably lower, at 54%. Support for social distancing has waned since late May. While a sizable segment of Americans (44%) visited friends or relatives in the last week, 70% perceived attending in-person gatherings of friends and family outside their own households as being a large or moderate risk. This is about 18 points higher than the perceived risk of going to a grocery store. While not asked in this wave, a vast majority of people (79%) thought people should wear a face mask while in a grocery or retail store, in the early July Wave 16 poll.

With cases rising in the US, the number of survey participants who were extremely or very concerned about the coronavirus outbreak increased to 60% this week. This is up from its trough of 54% at the end of May. The concern about the economy collapsing during the coronavirus outbreak is larger than the possibility of getting sick: 58% were extremely or very concerned about the economy, vs. 45% for getting sick.

The decline in trust in federal government has reached a new low at 30%. Over five in ten still support state and local government. Trust in local health officials and healthcare workers remained very high at 78%. In the previous Wave 16, about 2/3 trusted in local police and law enforcement (68%). Trust in one’s employer has stayed high (also Wave 16), at 72%, though down from 80% seen May 1.

The latest Coronavirus Index poll is Wave 18 of near-weekly surveys conducted by Axios-Ipsos. The current poll has a margin of sampling error of 3.1 percentage points.

Poll conducted April 29 to May 5, 2020 in the United States by the Pew Research Center found that 88% of Americans think the coronavirus outbreak is a major threat to the U.S. economy. About 2/3 (64%) see the outbreak as a major threat to the health of the US population. While members of both political parties are fairly close on their view on the economy, Democrats are much more concerned than Republicans, about the impact of the coronavirus on the health of the population as a whole. Local hospitals (88%) and national Public Health officials such as the CDC received the highest ratings in responding to the coronavirus outbreak, followed by elected local and state officials. Less than half (46%) thought the media was doing a good or excellent job on coronavirus reporting, a switch from the March poll. President Trump’s rating for doing a good or excellent job on his coronavirus response slipped to 41%. As for COVID-19 testing, 61% saw this as mostly or entirely under the responsibility of the federal government. Democrat and moderate Republicans agreed on federal responsibility, while conservative Republicans felt this was primarily a state responsibility. A majority of all age groups, especially people ages 18 to 49, emphasized federal responsibility.  Survey of about 11,000 adults was part of the American Trends Panel Survey. The margin of error is about 1.4 percentage points.

Recent poll of about 8000 adults in the US, Canada, Australia, France, Germany, Japan, Russia and the United Kingdom about the coronavirus threat. Survey was conducted February 7-9, 2020, online, by Ipsos.

Updated poll in the United States by NPR/PBS NewsHour/Marist on what Americans think about coronavirus disease. The March poll showed 70% of people were concerned about the spread of coronavirus to their community, up from 44% in February. However, the number who saw coronavirus as a real threat declined by 10 points to 56%. While most people still see it as a threat, more than a third (38%) think it’s blown out of proportion. A majority of Republicans think it has been blown out of proportion. Greatest trust in the information people hear about coronavirus, was placed in public health experts (84%), followed by state and local governments (72%). Lowest trust (37%) was placed in information from President Trump. The poll was conducted on March 13-14, 2020. The margin of error is about 5 percentage points.

Poll in the United States by NPR/PBS NewsHour/Marist on what Americans think about the new coronavirus disease. The poll was conducted between January 31 and February 1, 2020. The margin of error is about 5 percentage points. 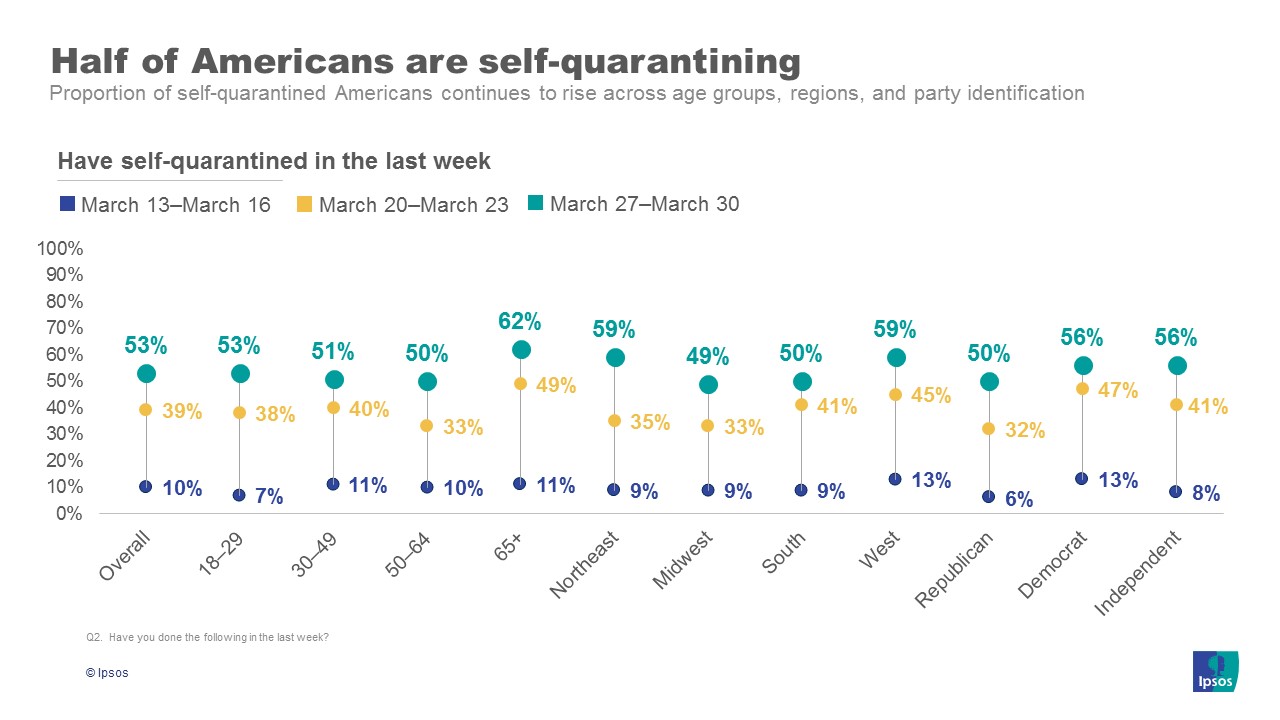 Polls About the Coronavirus and COVID-19 Pandemic