The final part of the Hollywood Hills-Hurricane Irma disaster analysis is the idea of selecting Rehabilitation Center at Hollywood Hills in the first place.  Much has been written about how to choose a nursing home.  Consumers are advised to read the ratings and visit the home ahead of time.  Talk to staff, families and residents.  Ask lots of questions.  Arrive unannounced and at off-hours.  Eat a meal.  All good advice.  Some even go so far as to recommend reading the facility’s emergency plan.

However, the reality is that the ratings and pre-reads would not necessarily have flagged this nursing home as a failed institution.  It was not one of the few selected for intensive monitoring and improvement as a “Special Focus Facility”.  HealthInsight rankings of all nursing homes nationally found the Rehabilitation Center at Hollywood Hills to be in the lower 42% of facilities in 2016 – below average, but not at the bottom.

Before the hurricane, the federal government website Nursing Home Compare, rated Hollywood Hills 2 out of 5 stars (most data through March 31, 2017).  A rock-solid Below Average facility.  It performed well on the Staffing ratings – 4 out of 5 stars (Above Average), with a considerably higher amount of LPN and nursing assistant hours per resident.  On Quality, it rated 3-stars (Average performance) along with thousands of other nursing homes.  (On a side note, the most recent update with data through June of 2017 brought the Quality measures rating up to 4 stars.)

What brought the nursing home down to a 2-star Below Average overall rating, was its 1-star score on Health Inspections, placing it in the bottom 20% of nursing homes.  The posted report from the March 2017 inspection, however, showed all deficiencies as having potential for minimal harm; minimal harm; or potential for actual harm.  Almost all the deficiencies affected only Some or Few residents.  From a layman’s point of view, the flags were just not that red.  Families might look at the detail, then hope that the home would be okay.  The psychology of nursing home placement is complicated for nearly every family.

The toughest raters seemed to be the state of Florida.  Before the hurricane, AHCA inspections gave it a 1-star Overall in Broward County, and 1-star for Quality of Care, 1-star for Quality of Life, 2-stars for Administration.  Yet, it earned 5-stars on Nutrition, Hydration, Restraints and other factors.  (The online report is no longer available, now that Hollywood Hills’ license is suspended.)  The March 2017 inspection report details did not identify any deficiency that suggested the nursing home couldn’t perform well in an emergency.  Except for the generator…which is still in progress, and we now know was never intended to support the air conditioner.

Only in the fictional Lake Wobegon is everyone (or at least all the children) above average.  By definition, someone must be below average.  Some of the ratings may even force-fit 20% of facilities into 1-stars, and another fifth into 2-stars.  If we say that a 2-star facility – solidly Below Average – is not suitable for a nursing home placement, then potentially 40% of nursing homes are unsuitable.  Potentially some 6000 nursing homes in the United States would no longer be suitable to receive Medicare or Medicaid reimbursement.  As a country, we have not yet come to that conclusion.  To get there, the United States will have a great deal of soul-searching and creative expansion of home health to undertake.  Perhaps the Hollywood Hills case is sufficiently disturbing to start such a conversation.

In the end, it was just as the River’s Rising lyrics said.  The world “changed, broke apart and was rearranged” for at least 12 families, and perhaps for every Hollywood Hills staff member who came to work during Hurricane Irma.  Every day, healthcare professionals need to work toward higher quality.  They may need to beef up emergency planning not only on a facility level, but also with families, with government and across industry sectors.  And when it comes down to expecting consumers to do more with ratings, we need to have an improved information system that helps people make better decisions for their loved ones.

Ticket #4301 may be closed, but important questions are still open. 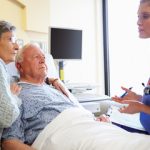